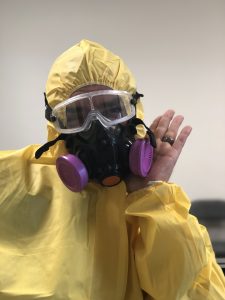 Vancouver’s wet, winter season ushers in more than just snow sports and cozy nights indoors. Frigid temperatures increase the risk of freezing pipes bursting and causing property floods. Heavy rainfall can result in flooded basements. And no matter the cause, any water damage in your property can lead to a mould infestation.

You owe it to your property to deal with mould contamination swiftly, and at 911 Restoration, we believe we owe it to you to do the same. Give us a call at 778-665-0490 and see how we can help you.


Our highly trained, IICRC certified mould remediation specialist in Vancouver treat your mould problem as if it were their own.

They inspect every nook and cranny of your property for hidden colonies. They consult a third-party laboratory to gain the clearest possible picture of your specific situation. And when they start the mould removal service in Vancouver, they don’t declare it done until they’ve removed both the current infestation and any threat of future growth.

Your home should be a safe haven. Your business should be your pride and joy. If mould contamination has tainted your property, take heart. With true experts on your side, mould removal is fast, affordable, and painless.

Call restoration water damage experts at 778-665-0490 and let us turn mould into a fuzzy memory.

Protecting Your Property From Black Mould

Mould’s unsightly appearance is the least offensive thing about it. This intrusive fungus can cause irreparable damage to floorboards, pipes, and drywall. Even worse, some varieties of mould can pose a threat to your health. If you don’t pursue mould decontamination for your property’s sake, you should at least do it for your own.

One of the most common types of mould is black mould. Unfortunately, this is one of the most toxic varieties as well. Black mould is often recognizable by its slimy, green-black appearance, though in drier conditions it takes on a more powdery consistency.

Property owners would be well-advised to seek professional black mould removal the second they discover the fungus in their home or business. In addition to the expected spores, black mould releases mycotoxins into the air. These hazardous particles can enter the human body through breath. When too many mycotoxins gather in your system, they create toxicity. This can result in health conditions ranging from allergies to respiratory issues to heart problems.

While black mould should be removed as quickly as possible, it’s important that you don’t try to handle mould remediation yourself. For one thing, mould cleanup requires professional insight and tools. Otherwise, the infestation is likely to return.

Secondly, if you don’t know how to properly approach black mould removal, you are at significant risk of releasing and inhaling a hazardous amount of mycotoxins.

Fortunately, the mould remediation specialists of 911 Restoration are trained to identify and remove even the most hazardous varieties. If your residential or commercial property is contaminated by suspicious growth, call us today. We’ll have you breathing easy in no time. Our phone number is 778-665-0490 and we will answer your phone call no matter the time of day. 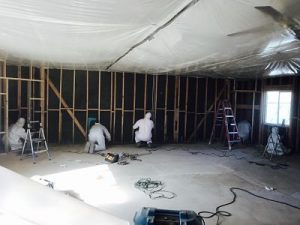 And for good reason.

Our IICRC certified technicians leave no stone unturned when it comes to mould decontamination. From the moment they show up at your door, they have one clear goal in mind:

To leave you with the reassuring knowledge that your property is 100% mould-free.

They do this first by thoroughly inspecting the property. In fact, your dedicated mould remediation professionals offer a visual inspection for property owners. Even if you only suspect mould due to a musty smell or discolouration on the ceiling, you still risk nothing by calling in the technicians of 911 Restoration. We offer this inspection because we don’t want any doubt to discourage you from pursuing crucial mould removal services.

If the technicians find mould , they then deliver a sample to a third-party laboratory for testing. The lab results help you understand exactly what kind of mould is in your home and how much damage it could do. The results help your tech understand what steps they need to take for successful mould remediation.

From mould cleanup to structural drying, the decontamination experts will remove every trace of growth from your property. By the time they walk away, you’ll be able to rest easy, knowing your property is fully restored to better-than-new condition.

Call Vancouver restoration companies today at 778-665-0490 and let us make your home or business feel clean and healthy once again. It’s never too late for a Fresh Start.